October 05, 2017
Your Online Reputation, That Is
I've had had an ongoing conversation on Twitter with someone opening a fast food franchise outlet in the area. He's had a rough time finding qualified and willing workers for his establishment. This doesn't surprise me. I've had conversations with many food service managers in the area who tell me it's hard to find good team members.

I feel for him, because it's tough enough getting the construction completed, certifications, permits, supply contracts, etc. set up. You'd think with lingering unemployment lurking about he'd have no problem finding people willing to join his team. Even with many applicants, he said a challenge to find people with good attitudes he can train to do what he needs them to do.

First, only half of the people with whom he scheduled interviews even bothered to show up. That in itself is telling. Second, he pre-screened applicants, checking their online spaces, and disqualified a few applicants because of things found in their Facebook profiles.

Your Online Reputation Matters!
He mentioned one applicant entered "Smoking Big Joints" as one of his interests. Another entered "Legalize Marijuana" as his interest.

I don't want to get into the politics of things and do believe in one's private life being private. But, how private your life is depends a great deal on how much you post online. Smoking marijuana and taking other illegal substances is considered such a liability in employment that many companies routinely screen new applicants for drug use. Coming up positive on a pre-employment screening means automatic disqualification. Many companies even go so far as to randomly screen all employees for drug use. This being the case, it really doesn't make sense to advertise your use of such substances in a very public forum.

My friend is certainly not alone in his use of social media to screen potential hires. Consider this Mashable article by Erica Swallow from October 2011: How Recruiters Use Social Networks to Screen Candidates. This type of search is routine now and job seekers should expect that they will be "googled" when they apply for a job.

I once had a very interesting conversation with a colleague whose daughter was getting ready to apply for teaching jobs. She went through Facebook and "untagged" herself anywhere she could find herself "tagged" - regardless whether the picture could be considered "bad" or not. She didn't want to take any chances.

Job Seekers: Market Yourself
Whether you realize it or not, you are a brand. When seeking employment, you have to market yourself in a similar way a company markets its brand. You have to show potential employers you have skills and the right attitude to be part of the team. If your career goal is to work in a head shop, then advertising the fact that you smoke marijuana might be a positive thing. However, if you want to work somewhere else, you might want to think twice about putting that fact in a public forum.
Some may be thinking to themselves, "That's not fair." Whether it's fair or not is beside the point. This is where the job market is and you need to take your overall online reputation into consideration.

Krista Neher shared some great tips on checking, and building, your online reputation as part of getting ready to look for a job.

Current Employees Also Need To Consider This
If you are already employed, you might also consider what you post online and how your management might feel it reflects on them. This past weekend I told some business-owner friends about this article which prompted them to tell me about a problem they had with a former employee. He "friended" them and "liked" their Facebook page, which is nice. But, he routinely posted profanity-laced tirades against people he felt slighted him. They were concerned about how these posts might reflect upon their business.

I'm not for businesses having the ability to muzzle their staff online. However, it is worth thinking about how your actions reflect on the people who pay you salary. Whether you realize it or not, everyone is brand ambassador. Would you want your online actions to hinder your company's ability to do business?

Employers also need to consider this. How much is too much when it comes to your team members potential damage to your reputation? It's a good idea to consider this and create some sensible policies for this eventuality.

What say you? Have you run into any problems hiring or getting hired because of something posted online? Have you taken steps to clean up your online reputation? Please feel free to share in the comments.

Popular posts from this blog

November 09, 2017
On Day 3 of Pubcon Vegas 2017 I sat in on a session on Reputation Management with Matt Craine and Tony Wright presenting. Here are the notes I took during the presentations.

Your brand is not what YOU think it is - it's what THEY think it isIt's not about ownershipWhat is their impression of you and your brand?It's about your presale relationship with your customerEveryone is a stalkerWhen you meet someone in a business context, people are searching for you and your brandYou (CEO or business owner) now represent the company's brandMake sure your LinkedIn profile is complete and up-to-dateChange your LinkedIn visibility settings so those who are not logged in can see youMake sure to claim your business' LinkedIn profileKeep it updatedUse current imagesOnly 6 out of 10 customers visit a local company's website when researching for a purchaseAudit your…
Read more

Have you considered entering? Do you have some amazing work in the area of SEO, PPC and content marketing? If you do, consider entering. Get details here: https://www.ussearchawards.com/ .

One of the great parts of being a judge is seeing the excellent work others are doing in our industry. Some of the work is quite impressive, indeed. In order to win, your project really needs to be the best of the best.

Here's a hint: The best entries are the ones that give the most details. Don't be shy and don't skimp on the numbers. If you can't share because of client confidentiality agreements, then you might not want to waste your time. But, if your clients are on board - share the great work you d…
Read more
April 15, 2019 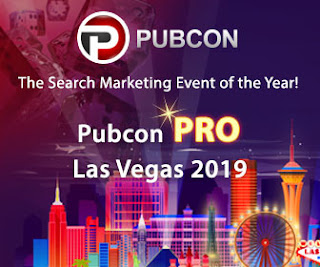 I'm very happy to announce that I will be presenting at the Pubcon Pro digital marketing conference in Las Vegas October 7-10, 2019.

I'll post an update as I get more information.
Read more