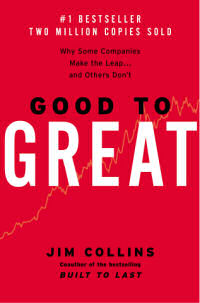 Good To Great: Why Some Companies Make The Leap ... And Others Don't is a collection of case studies put together in an attempt by Jim Collins and his research team to quantify what it takes to make a good company great. The group looked at a number of companies which exceeded the growth of their competitors and of the overall market for fifteen years or more and selected eleven as being the best examples.

Each of the eleven companies which met their "good to great" criteria had some key things in common. Collins isolated six characteristics found in each company which helped put them over the top from good to great and describes them in detail in the book:
The book itself is easy to read and digest and has a lot of takeaway lessons anyone can start using today. While leading a company to make the jump from good to great may take some time, there are many things anyone can begin doing to get started on the path. The lessons in the book are not only for corporate leaders, but for anyone who wants to learn more about team building, leadership for success and personal growth.

For the statics geeks there are plenty of charts and numbers to help you understand the research in detail and how Collins and company chose the corporations for the study. There is also a couple math proofs to show the companies they chose for the study weren't just flukes, but genuinely went from good to great.

It's also important for those who take the lessons in the book and start down the path from good to great to keep up the work. One of the companies of the eleven singled out for study was Circuit City. They had a great plan, great leadership and a company which was outperforming their competitors by a large margin. Given that advantage, should they not have prevailed through the recent economic downturn and competition from Best Buy and such? Although I don't know for sure, but I would guess the leadership in the company failed to keep working in the six areas outlined above and eventually fell behind. It would certainly be an interesting follow up study.

I recommend this book to anyone who wishes to learn more about leadership and team building. There are lessons for everyone regardless of their place on the corporate ladder.

Good To Great: Why Some Companies Make The Leap ... And Others Don't by Jim Collins (Amazon Affiliate Link)

You can get more information about Jim Collins on his web site.

at October 05, 2017
Email ThisBlogThis!Share to TwitterShare to FacebookShare to Pinterest